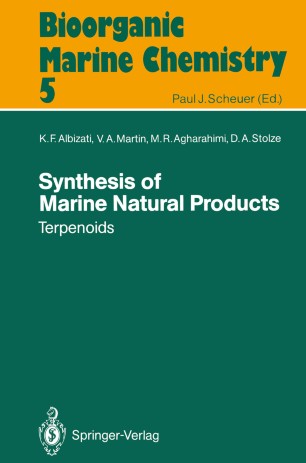 Volumes five and six of Bioorganic Marine Chemistry differ from their predecessors in two respects - they deal exclusively with labor­ atory synthesis of marine natural products and they represent the effort of a single author and his associates. The rationale for these departures is readily perceived. For several decades organic synthesis has without doubt been the most spectacular branch of organic chemistry. While the late R.B. Woodward's dictum - organic compounds can undergo only four basic reactions: they can gain electrons; they can lose electrons; they can be transformed with acid or with base - is still true, the wealth and variety of available reagents which will accomplish chemical transformations has reached staggering proportions. Little wonder then, that synthetic methodology has achieved a high degree of predictability and total synthesis of natural products has been successfully directed toward ever more challenging targets. As for the second point, that of single authorship, multiple authorship would invariably have led to gaps and overlaps, thus making it difficult to assemble and assess recent research in a systematic and comprehens­ ive fashion.