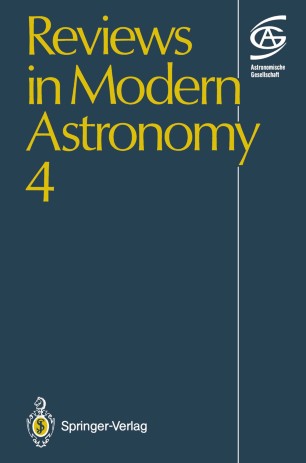 The yearbook series Reviews in Modern Astronomy of the Astronomische Gesell­ three years ago in order to bring the scientific events schaft (AG) was established of the meetings of the society to the attention of the worldwide astronomical community. Reviews in Modern Astronomy is devoted exclusively to the invited reviews, the Karl Schwarzschild lectures, and the highlight contributions from leading scientists reporting on recent progress and scientific achievements at their research institutes. Volume 4 comprises all, eighteen contributions which were presented during the fall meeting of the AG at Preiburg/Breisgau in September 1990. They cover problems in solar research and the solar system as well as the first results of the ROSAT and Hipparcos space missions, stellar and extragalactic studies, and Supernova 1987A in the Large Magellanic Cloud. The Karl Schwarzschild Medal was awarded to Professor Eugene Parker1. His lecture entitled "Convection, Spontaneous Discontinuities, and Stellar Winds and X-Ray Emis·sion" begins this volume.