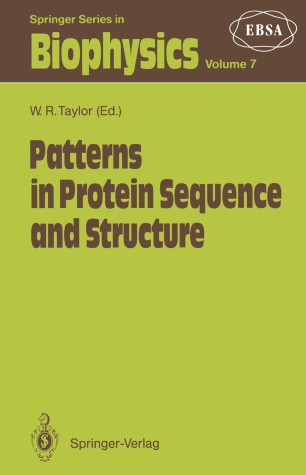 Patterns in Protein Sequence and Structure

The contents of this volume derive loosely from an EMBO worksh9P held at EMBL (Heidelberg) towards the end of 1989. The topic of Patterns in Protein Sequence and Structure attracted a wide range of participants, from biochemists to computer scientists, and that diversity has, to some extent, remained in the contributions to this volume. The problems of interpreting biological sequence data are to an increasing extent forcing molecular biologists to learn the language of computers, including at times, even the abstruse language of the computer scientists themselves. While, on their side, the computer scientists have discovered a veritable honey-pot of real data on which to test their algorithms. This enforced meeting of two otherwise alien fields has resulted in some difficulties in communication and it was an aim of the EMBO workshop to help resolve these. By the end, most biologists at the meeting had, at least, heard the terms Dynamic Programming and Regular Expression while for their part the computer programmers began to realise that protein sequences might be more than simple Markov chains in a 20-letter alphabet. Thanks to the modern facilities at EMBL, the three day meeting was video-taped and from this a transcript was taken and offered to the speakers as the basis for a contribution to this volume.