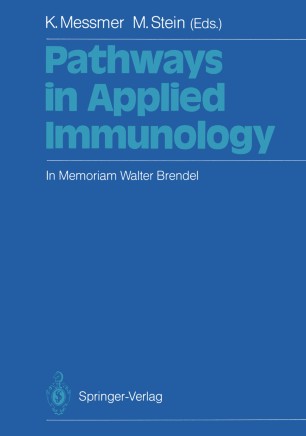 This book is dedicated to the memory of Walter Brendel, late Professor of Experimental Surgery and Chairman of the Institute for Surgical Research at the University of Munich, Germany. For 20 years Walter Brendel organized the renowned Round Table Symposium on Applied Immunology, first in Kitzbiihel and later in Axams, Austria. On the occasion of the 20th symposium in January 1989 he gathered together a number of scientists who have been leaders in the field of transplantation immunology and clinical transplantation for the past two decades. All of them had participated at previous meetings, some on a regular basis. Many of the new discoveries in applied immunology and transplantation medicine were first presented and vividly dis­ cussed at the Round Table Symposia. The annual Kitzbiihel! Axams meetings became well-known and invitations much sought after, not only for this reason but also because of the uniquely intimate atmosphere that promoted the free exchange of research findings and theoretical cut and thrust.