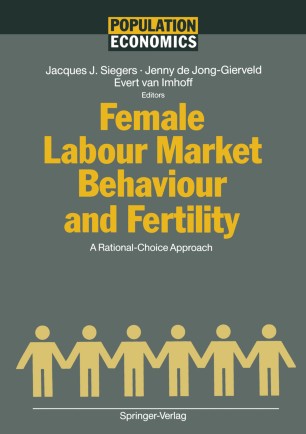 Since 1987, the investigation of the relationship between female labour market behaviour and fertility, which forms part of the research programme of the Economic Institute / Centre for Interdisciplinary Research on Labour Market and Distribution Issues (CIAV) of Utrecht University, also became a part of the research programme of the Netherlands Interdisciplinary Demographic Institute (NIDI). Since then, I have been entrusted with research on this topic. In this context, I acted on a suggestion made by Frans Willekens to organize an international workshop, with the help of other members of the NIDI staff and with the administrative and organizational support of the NIDI. This resulted in the workshop "Female Labour Market Behaviour and Fertility: Preferences, Restrictions, Behaviour," held at the Netherlands Interdisciplinary Demographic Institute in The Hague, April 20-22, 1989, under the auspices of the European Association for Population Studies (EAPS). In this workshop, demographers, econometricians, economists, psychologists and socio­ logists discussed the paths to a truly interdisciplinary approach to the relationship between female labour market behaviour and fertility. Such an interdisciplinary approach requires a common theoretical framework. The rational-choice framework was considered to be best suited to this purpose. As a consequence, the workshop was not only structured by what was studied, but also by how it was studied. This volume consists of the papers presented at the above-mentioned workshop, as revised by the authors in collaboration with the editors.