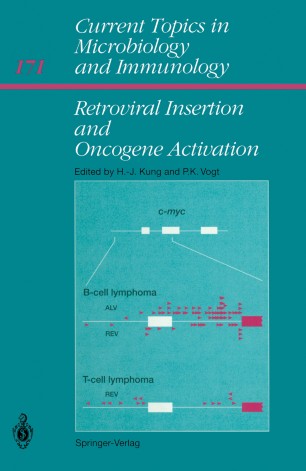 An integrated retrovirus effectively becomes part of the cellular genome, but with the difference that the virus to a large extent retains control over its own expression through nontranslated sequences in the long terminal repeat (L TR). Some retroviruses also code for nonstructural proteins that further regulate proviral expression. Integration changes the cell genome; it adds viral genes, and in the case of transducing retroviruses also adds cell-derived oncogenes that have been incorporated into the viral genome. Integration can also have consequences for cellular genes. The transcriptional signals in a provirus can activate expression of neighboring cellular genes; the integration even can disrupt and thus inactivate cellular genes. These effects of retroviral genomes take place in cis; they are referred to as insertional mutagenesis and are the subject of this volume. Almost 10 years have passed since W. Hayward, S. Astrin, and their colleagues found that in B cell lymphomas of chickens, induced by avian leukosis virus, transcription of the cellular proto-oncogene myc was upregulated through the integration of a complete or partial provirus in its vicinity. This landmark discovery suggested a mechanism by which retro­ viruses that do not carry cellular oncogenes in their genome ("nonacute retroviruses") can cause cancer. It contributed the first evidence for the carcinogen potential of oncogenes that are not part of a viral genome.