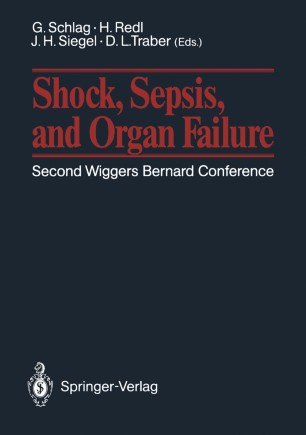 The Wiggers Bernard Conferences, named after two great physiologists of the past, are an­ nual gatherings of the leaders in the field of shock. The meetings focus on specific areas of which appears to be showing the most advancement during the previous year. There are se­ veral types of sessions; informal presentations during which the seminarian can be intenup­ ted in order to clarify a particular point; formal discussions follow each presentation; these are followed by informal gatherings in which these discussions continue during meals and libation in a very relaxed environment. The 1990 meeting took place in Durnstein, Austria. A small hamlet in the wine growing area of the Wachau valley, on the Danube above Vien­ na. This was the site of a former citadel where the English King Richard the Lion-Heart (Coeur de Uon) was held for ransom during the middle ages. The frank beauty and hospi­ tality of this area in addition to the ancient Roman adage "in vino veritas" acted as a catalyst to crystalize the thoughts of this interdisciplinary group of scientists as they discussed the following areas: 1. Gut as a Source of Organ Failure 2. Metabolic Aspects of the Liver in Sepsis 3. Endothelium as a Target'in Sepsis We would like to thank the participants of the conference for taking time away from their very productive and busy schedules to participate in the conference and for the prompt pre­ sentation of their manuscripts and editions of their discussions.