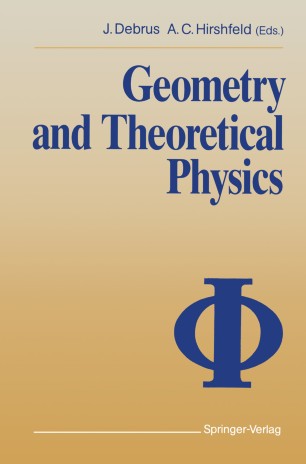 The interaction between geometry and theoretical physics has often been very fruitful. A highlight in this century was Einstein's creation of the theory of general relativity. Equally impressive was the recognition, starting from the work of Yang and Mills and culminating in the Weinberg-Salam theory of the electroweak interaction and quantum chromodynamics, that the fundamental interactions of elementary particles are governed by gauge fields, which in ma­ thematical terms are connections in principal fibre bundles. Theoretical physi­ cists became increasingly aware of the fact that the use of modern mathematical methods may be necessary in the treatment of problems of physical interest. Since some of these topics are covered at most summarily in the usual curricu­ lum, there is a need for extra-curricular efforts to provide an opportunity for learning these techniques and their physical applications. In this context we arranged a meeting at the Physikzentrum Bad Ronnef 12-16 February 1990 on the subject "Geometry and Theoretical Physics", in the series of physics schools organized by the German Physical Society. The participants were graduate students from German universities and research institutes. Since the meeting occurred only a short time after freedom of travel between East and West Germany became a reality, this was for many from the East the first opportunity to attend a scientific meeting in the West, and for many from the West the first chance to become personally acquainted with colleagues from the East.