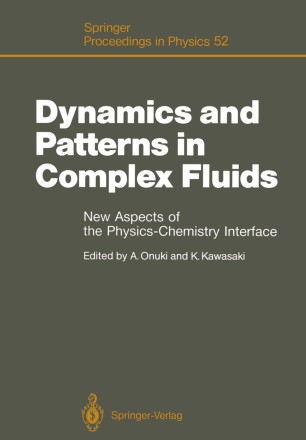 Dynamics and Patterns in Complex Fluids

New Aspects of the Physics-Chemistry Interface

The fourth Nishinomiya-Yukawa Memorial Symposium, devoted to the topic of dynamics and patterns in complex fluids, was held on October 26 and 27, 1989, in Nishinomiya City, Japan, where ten invited speakers gave their lectures. A one-day meeting, comprising short talks and poster sessions, was then held on the same topic on October 28 at the Research Institute for Fundamental Physics, Kyoto University. The present volume contains the 10 invited papers and 38 contributed papers presented at these two meetings. The symposium was sponsored by Nishinomiya City, where Prof. Hideki Yukawa once lived and where he wrote the celebrated paper describing the work that was later honored by a Nobel prize. The topic of the fourth symposium was chosen from one of the most vigorously evolving and highly interdisciplinary fields in condensed matter physics. The field of complex fluids is very diverse and still in its infancy and, as a result, the definition of a complex fluid varies greatly from one researcher to the next. One of the objectives of the symposium was to clarify its definition by explicitly posing a number of potentially rich problems waiting to be explored. Indeed, experimentalists are disclosing a variety of intriguing dynamical phenomena in complex systems such as polymers, liquid crystals, gels, colloids, and surfactant systems. We, the organizers, hope that the symposium will contribute to the increasing importance of the field in the coming years.