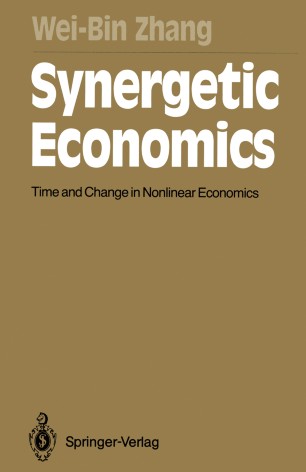 Time and Change in Nonlinear Economics

Synergetic Economics presents a new advance in analytical economics. It deals with problems related to time and change in economic systems, including complex aspects, such as the effects of nonlinearity, instability, bifurcation and chaos in economic evolution. The author argues that economic systems may run through a hierarchy of instabilities in which more and more structural patterns evolve. Such instabilities are caused by changes in the external parameters of the system. They may lead to new spatial-temporal patterns of the system. A number of explicit examples are provided to show how such behavior can occur in various dynamic economic systems. Analytical methods are also presented to cope with nonlinear problems. Of particular interest are sudden (structural) changes, the existence of regular and irregular oscillations, the role of random factors in economic evolution, and the effects of time scales and rates of adjustment of economic variables in economic analysis. The author carefully examines the implications of nonlinear phenomena for decision making, and for economic development in general.