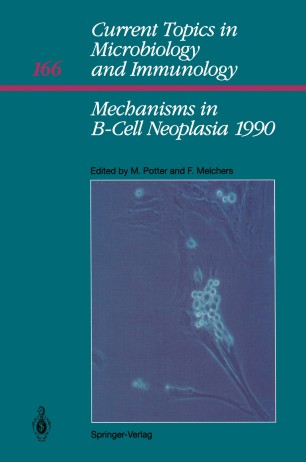 The eighth workshop in this series on Mechanisms in B-Cell Neoplasia 1990 was held in Wilson Hall at the National Institutes of Health, Bethesda, Maryland on March 28-30. Five major topics formed the basis for the discussions: 1) progress in experimental models of B-cell tumorigenesis, 2) the role of IL-6 in plasma cell tumor formation with particular emphasis on human myeloma, 3) immortaliza­ tion and regulation of mitosis in B-cells, 4) the mYQ gene in B-cell neoplasia, and 5) the role of EBV and other oncogenes in transforma­ tion of human B-Iymphocytes. A meeting on the Epidemiology of Myeloma was held at the N. I. H. on the preceding day, and many of those interested in the clinical aspects of myeloma were also participants at the workshop. Experimental Models of B-Cell Tumor Development We have seen in the last eight years the steady growth of model experimental systems, many of which have been designed to be counter­ parts of the major forms of human B cell tumors, e. g. , follicular lymphomas, Burkitt's lymphomas, acute B-cell leukemia and multiple myeloma. A variety of novel ways of inducing these tumors has been described. Advantage has been taken of the "experiments in nature" to identify critical genes that playa role in tumor pathogenesis. These genes have been identified by being near to viral insertion and chromosomal translocation sites, or by having been incorporated or transduced into a defective transforming retrovirus.