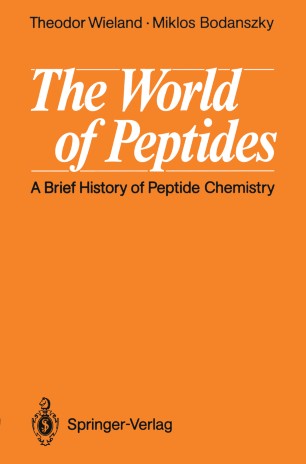 The World of Peptides

A Brief History of Peptide Chemistry

Almost two centuries ago proteins were recognized as the primary materials (proteios = primary) oflife, but the significance and wide role of peptides (from pepsis = digestion) in practically all life pro­ cesses has only become apparent in the last few decades. Biologi­ cally active peptides are now being discovered at rapid intervals in the brain and in other organs including the heart, in the skin of amphibians and many other tissues. Peptides and peptide-like compounds are found among toxins and antibiotics. It is unlikely that this process, an almost explosive broadening of the field, will come to a sudden halt. By now it is obvious that Nature has used the combination of a small to moderate number of amino acids to generate a great variety of agonists with specific and often highly sophisticated functions. Thus, peptide chemistry must be regarded as a discipline in its own right, a major branch of biochemistry, fairly separate from the chemistry of proteins. Because of the important role played by synthesis both in the study and in the practical preparation of peptides, their area can be considered as belonging to bio-organic chemistry as well. The already overwhelming and still increasing body of know­ ledge renders an account of the history of peptide chemistry more and more difficult. It appears therefore timely to look back, to take stock and to recall the important stages in the development of a new discipline.