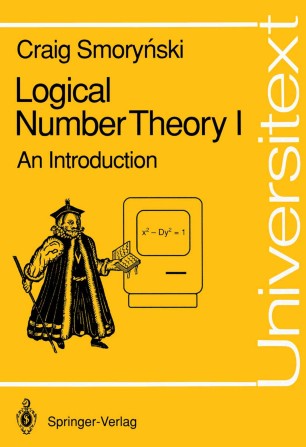 Number theory as studied by the logician is the subject matter of the book. This first volume can stand on its own as a somewhat unorthodox introduction to mathematical logic for undergraduates, dealing with the usual introductory material: recursion theory, first-order logic, completeness, incompleteness, and undecidability. In addition, its second chapter contains the most complete logical discussion of Diophantine Decision Problems available anywhere, taking the reader right up to the frontiers of research (yet remaining accessible to the undergraduate). The first and third chapters also offer greater depth and breadth in logico-arithmetical matters than can be found in existing logic texts. Each chapter contains numerous exercises, historical and other comments aimed at developing the student's perspective on the subject, and a partially annotated bibliography.