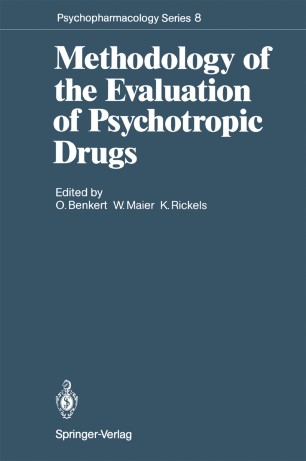 Methodology of the Evaluation of Psychotropic Drugs

The idea of placebo-controlled drug trials and the advent of test statistics during the first part of this century were the major milestones in the establishment of a convincing methodology for demonstrating the efficacy of treatments. The first tricyclic and neuroleptic drugs were tested for their efficacy in psychiatric disorders along the lines of these methodological developments, but subsequent trials with psychotropic drugs did not adhere to these principles to the same extent because it became difficult to justify placebo-controlled trials once effective treatments had been established. Consequently, the second generation of an­ tidepressants and neuroleptics (since the early 1960s) were mainly tested, in Europe at least, in samples of patients using trials controlled by standard treatment only, and the methodological basis of these second generation trials became fragile, as will be demonstrated by several papers in this book. This development did not provoke much discussion until recently, when scientific and administrative interest in the methodology of the evaluation of psychotropic drugs increased substantially. A series of factors contribute to the growing interest in the standards of psychotropic drug trials: 1. The proportion of psychiatric patients resistant to treatment is growing; the efficacy of well-established forms of treatment therefore seems to be limited. 2. A series of psychotropic drugs were withdrawn from the market, mainly because they caused serious side effects. The efficacy and safety ofthese drugs had previously been demonstrated in drug trials, which raised the question whether the drug trials carried out were well-designed.