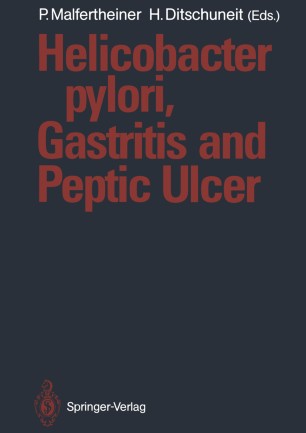 Helieobaeter pylori has recently been recognized as a new genus according to specific taxonomic criteria; the "popular" name Campylobaeter pylori has been corrected by scientific progress. Following the discovery of the spiral microorgan­ ism in gastric mucosa by Marshall and Warren in 1982, it took only a few years for H. pylori to become established as a factor in the pathogenesis of gastritis and peptic ulcer disease. Interest in different aspects of H. pylori has grown continuously and has attracted scientists from various medical and biological disciplines such as gastroenterology, microbiology, pathology, immunology, and pharmacology. Indeed H. pylori provides an excellent model for interdisciplinary interaction and cooperation. To promote this concept of interdisciplinary research and exchange of knowledge, a European Campylobacter (Helicobacter) Pylori Study Group was founded in 1987 in Copenhagen. The second meeting of this expanding group was held from October 12-14,1989 in Ulm, FRG. The fact that more than 500 participants attended the conference and that 187 original contributions from all five continents were presented clearly confirmed that H. pylori has "scientifically infected" the whole world. Our understanding of the microbiological and pathogenetic aspects of H. pylori is continuously being challenged as new results follow swifthy from different research areas. This book includes an update and progress report on the various aspects of H. pylori presented and discussed in special workshops held during the meeting in Ulm.