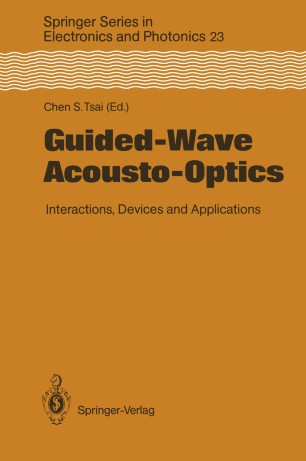 Part of the Springer Series in Electronics and Photonics book series (SSEP, volume 23)

The field of integrated- or guided-wave optics has experienced significant and continuous growth since its inception in the late 1960s. There has been a considerable increase in research and development activity in this field worldwide and some significant advances in the realization of working in­ tegrated optic devices and modules have been made in recent years. In fact, there have already been some commercial manufacturing and technical ap­ plications of such devices and modules. The guided-wave-acoustooptics involving Bragg interactions between guided optical waves and surface acoustic waves is one of the areas of in­ tegrated-optics that has reached some degree of scientific and technological maturity. This topical volume is devoted to an in-depth treatment of this emerging branch of science and technology. Presented in this volume are concise treatments on bulk-wave acoustooptics, guided-wave optics, and surface acoustic waves, and detailed studies of guided-wave acoustooptic Bragg diffraction in three promising material substrates, namely, LiNb0 , 3 ZnO/Si0 , and GaAs, the resulting wide band modulators and deflectors, 2 and applications. The chapters cover not only the basic principles and the­ oretical analysis, but also the design, fabrication, and measurement of the resulting devices and modules, and their applications.