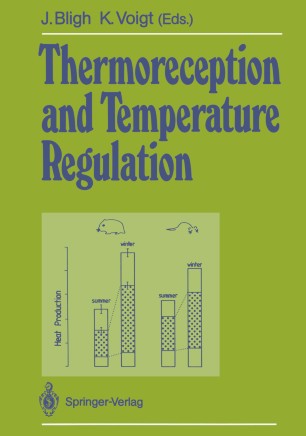 As indicated in the Preface, the contributions to this volume are based upon the papers presented at the symposium on Thermoreceptors and Temperature Regula­ tion held in July 1988 at the Institute of Physiology of the University of Marburg (Federal Republic of Germany) to celebrate and commemorate the life and achievements of HERBERT HENSEL, who directed that Institute from 1955 until his death in 1983, and whose most notable and significant contributions to thermo­ physiology were in the areas of the properties and characteristics of thermo sensors, mammalian thermoregulation more generally, and the psychophysiology of ther­ mal sensation. All the papers in this volume deal, to a greater or lesser extent, with these discernibly different but closely allied aspects of mammalian physiology. The editors have sought to achieve cohesion, flow, and balance both in the contributed articles and in their order of presentation, without either large gaps or redundancies in the coverage of the recent advances in the understanding of thermoreceptors and thermoregulation. At the same time we have sought to avoid such a degree of editorial control as to destroy the individuality of the contributions, and the judgements upon which they were based. We have also sought to look both backwards and forwards, and to include some legitimate extension of the con­ sideration of thermosensitivity and thermoregulation into such areas as climatic adaptation and fever. Hence the "greater or lesser" of the closeness of this series of papers to HERBERT HENSEL'S scientific interests.