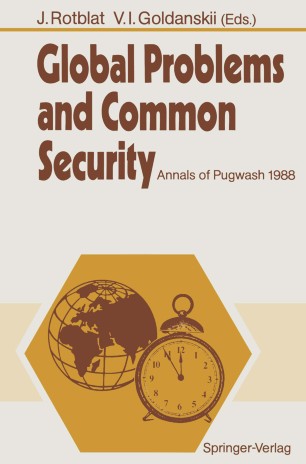 After many years of sterile arms control negotiations between the super powers, which did not produce a single genuine disarmament measure - and sometimes had the opposite effect of stimulating the development of new weapons to serve as bargaining chips - an agreement to abolish completely two categories of nu­ clear weapons, the INF Treaty, was signed and is now being implemented. This historical event, the first actual destruction of deployed nuclear missiles (although not of their warheads) became possible largely because of the radical changes in the policies of the Soviet Union, the "new way of thinking", ad­ vanced by its leader Mikhail Gorbachev. The relaxation of tension that resulted from this policy was one of the factors contributing to the successful conclu­ sion of the INF Treaty. Another, no less important factor, was the acceptance by the Soviet Union of on-site inspections as a basic element of a verification system essential to ensure compliance with the Treaty. This breakthrough led to the mutual acceptance of an elaborate and precise verification regime, and thus made possible the signing of the INF Treaty, which in tum contributed to the further lessening of tension between East and West. But perhaps the most important factor, one which carries much promise for the future, was the changed approach to security problems.