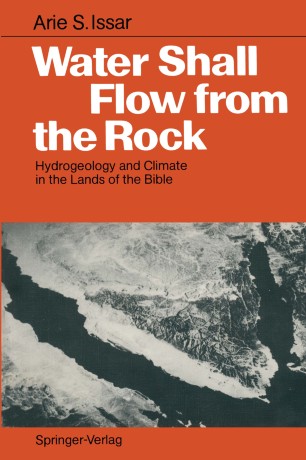 Water Shall Flow from the Rock

Hydrogeology and Climate in the Lands of the Bible

Many times when the author saw the bedouins of southern Sinai excavate their wells in the crystalline rocks, from which this part of the peninsula is built, the story of Moses striking the rock to get water came to mind. The reader will, indeed, find in this book the description for a rather simple method by which to strike the rock to get water in the wilderness of Sinai. Yet this method was not invented by the author nor by any other modem hydrogeologist, but was a method that the author learned from the bedouins living in the crystalline mountains of southern Sinai. These bedouins, belonging to the tribe of the Gebelia (the "mountain people"), live around the monastery of Santa Katerina and, according to their tradition, which has been conftrmed by historical research, were once Christians who were brought by the Byzantine emperor, Justinian, from the Balkans in the 6th century A. D. to be servants to the priests of the monastery. They know how to discern places where veins of calcite fIlled the fractures of the granites; such places are a sign of an extinct spring. They also know how to distinguish an acid hard granite rock, and hard porphyry dike from a soft diabase dike. The latter indicated the location at which they should dig for water into the subsurface. In Chapter 9, the reader will ftnd a detailed description of how they used this knowledge to extract water from the rock.