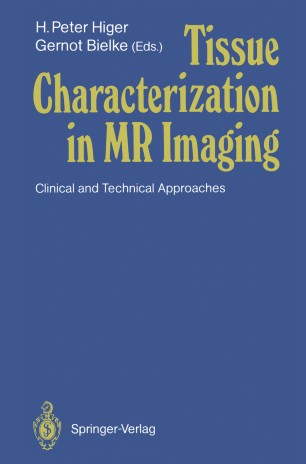 H.P. HIGER 1 In the seventeenth century people dreamed about a machine to get rid of evil spirits and obsessions, which were thought to be the main source of mis­ fortune and disease. I am not going to question this approach, because in a way it sounds reasonable. They dreamed of a machine that would display im­ ages from the inner world of men which could be easily identified and named. Somehow these are the roots of MR imaging. Of course, we now view disease from a different point of view but our objectives remain the same, namely to make diseases visible and to try to characterize them in order to cure them. This was the reason for setting up a symposium on tissue characterization. About 300 years later the clinical introduction of MRI has great potential for making this dream come true, and I hope that this symposium has con­ stituted another step toward its realization. When Damadian published his article in 1971 about differences in T1 relaxation times between healthy and pathological tissues, this was a milestone in tissue characterization. His results initiated intensive research in­ to MR imaging and tissue parameters. Actually his encouraging discovery was not only the first but also the last for a long time in the field of MR tissue characterization.