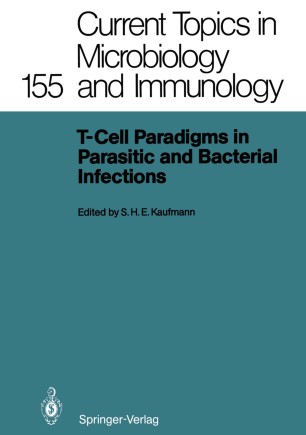 It has been said that the development of vaccines against a variety of infectious diseases is among the greatest triumphs of immunology. Indeed, several pathogens have lost their horror through the availability of effective vaccination measures. Unfortunately, this does not hold true for the pathogens dealt within this volume. Malaria, schistosomiasis, leishmaniasis, leprosy, and tuberculosis together are prevalent in more than 100 countries, and over 400 million persons suffer from these diseases. It is becoming increasingly clear that the failure to control these infections in a satisfactory way is directly related to the complexity oftheir interactions with the immune system. These agents have lived with their hosts for long enough to give both-host and parasite-ample opportunity to develop a highly sophisticated interrelationship. The central role of T lymphocytes both in acquired resistance to and pathogenesis of these microbes is well appreciated. In the beginning it may have been thought that acq uired resistance against infectious agents is nothing but another aspect of the immune response, studied with soluble and particulate antigens. This simple concept has gradually changed, and it has become clear that the viability not only of the immune cells but also of the 'antigens' adds another dimension to the game. Several achievements in cellular immunology and molecular biology have now made it possible to better understand at least some mechanisms in this intricate interplay.