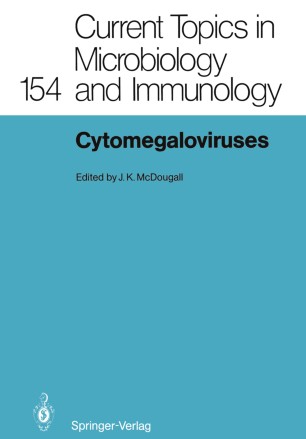 Named for the enlarged, inclusion-bearing cells characteristic of infection by these viruses, cytomegaloviruses present a significant challenge to both microbiologist and immunologist. Although most primary infections in humans are subclinical, cytomegalovirus can be associated with a wide spectrum of disease, particularly when infection occurs in the immuno­ compromised individual or as a result of congenital or perinatal infection. Although reinfection with cytomegalovirus has been demonstrated, most recurrent and persistent infections result from the reactivation of latent virus. Cytomegaloviruses, like other members of the Herpesviridae family, have the capacity to establish latency after a primary infection but the mechanisms for establishing the nonreplicating but reactivat­ able state have not been defined. The factors responsible for the spectrum of manifestations of cytomegalovirus infection are largely undetermined but host immunological function, route of infection, and size of inoculum all contribute to the extent and severity of disease. Cytomegaloviruses have the largest genomes in the herpes­ virus family, approximately 240 kilo base pairs, providing a potential coding capacity for more than 200 proteins of which less than one-fourth have been mapped and described. There are many similarities to other herpes viruses in genome structure and gene expression; for example, three temporal classes of genes can be identified as rx (immediate-early), f3 (early), and y (late) products. The first five chapters of this volume review and describe recent developments in understanding the trans­ cription and regulation of these gene classes.