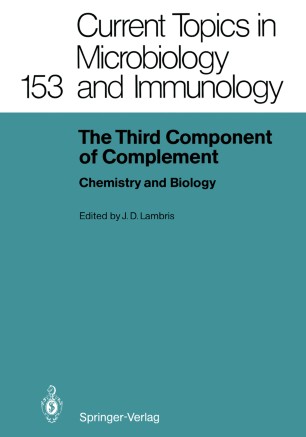 The Third Component of Complement

The third component of complement, C3, is one of the most versatile proteins and an important participant in immune surveillance and immune response pathways. Its multifunctio­ nality is based on its ability to interact specifically with multiple serum complement proteins, cell surface receptors, and mem­ brant;-associated regulatory proteins. One of its most intriguing strategies of interaction with cell surfaces is the covalent binding of activated C3 through the internal thioester. The field has expanded over the past 10 years and a wealth of information has accumulated. C3 from various species and many of the human C3 binding proteins have been cloned and expressed. Numerous cellular responses mediated by the diffe­ rent fragments of C3 have been described. The findings that C3 interacts in a ligand-receptor-like fashion with proteins of nonself origin such as the gC of herpes simplex virus, a 70-kDa protein from Candida albicans, proteins from Epstein-Barr virus, etc. has opened a new field of investigation. The papers assembled in this volume summarize the wealth of data on the various aspects of the C3 interactions; together they bring to the reader new information on the chemistry, molecular gene­ tics, biology, and pathophysiology of C3 and C3-binding proteins. Emphasis is given to structural features as they relate to functions. Spring 1989 JOHN D. LAMBRIS, HANS J. MULLER-EBERHARD Table of Contents J. E. VOLANAKIS: Participation of C3 and Its Ligands in Complement Activation . . . . . . . . . . . 1 S. R. BARNUM, G. FEY, and B. F. TACK: Biosynthesis and Genetics of C3 . . . . . . . . . . . . .