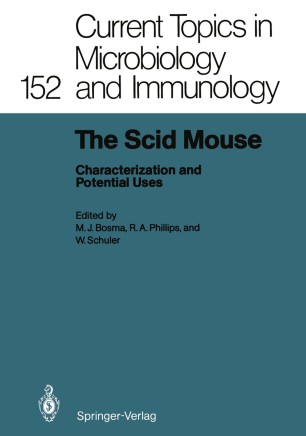 During routine genetic screening of several immunoglobulin heavy chain congenic mouse strains in 1980, one of us (MB) was surprised to find that several mice in the C.B-17IIcr strain, which was being maintained in a specific-pathogen-free facility of the Fox Chase Cancer Center (Philadelphia, PA), did not express serum immunoglobulin of the appropriate allotype. Fearing an error in the breeding of these mice, the sera of the suspect mice were screened for other allotypes. When these tests revealed a complete absence of serum immunoglobulin, it became apparent that a mutation had probably occurred in the C.B-17IIcr line. Further analysis revealed that a single breeding pair was respon­ sible for all of the immunoglobulin negative mice and that the defect showed recessive inheritance. Thus was the C.B-17/Icr scid or severe combined immune deficient (scid) mouse discovered. Although it has taken most animal facilities several years to breed scid mice of high quality for experimental purpose, it was clear by 1987 that many investigators were beginning to exploit the unique qualities of the scid mouse for studies in several areas.