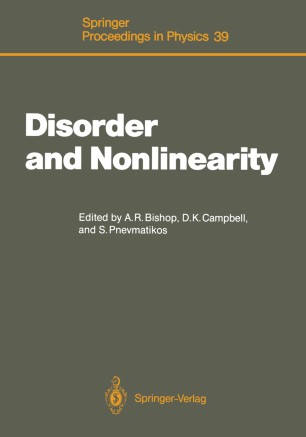 ill the past three decades there has been enonnous progress in identifying the es­ sential role that "nonlinearity" plays in physical systems. Classical nonlinear wave equations can support localized, stable "soliton" solutions, and nonlinearities in quantum systems can lead to self-trapped excitations, such as polarons. Since these nonlinear excitations often dominate the transport and response properties of the systems in which they exist, accurate modeling of their effects is essential to interpreting a wide range of physical phenomena. Further, the dramatic de­ velopments in "deterministic chaos", including the recognition that even simple nonlinear dynamical systems can produce seemingly random temporal evolution, have similarly demonstrated that an understanding of chaotic dynamics is vital to an accurate interpretation of the behavior of many physical systems. As a conse­ quence of these two developments, the study of nonlinear phenomena has emerged as a subject in its own right. During these same three decades, similar progress has occurred in understand­ ing the effects of "disorder". Stimulated by Anderson's pioneering work on "dis­ ordered" quantum solid state materials, this effort has also grown into a field that now includes a variety of classical and quantum systems and treats "disorder" arising from many sources, including impurities, random spatial structures, and stochastic applied fields. Significantly, these two developments have occurred rather independently, with relatively little overlapping research.