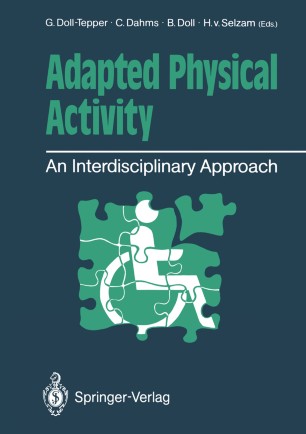 From 21-24 June 1989 the International Federation of Adapted Physical Activity (IF APA) held its 7th International Symposium "Adapted Physical Activity -An Interdisciplinary Approach" in Berlin (West). This was the first time that this symposium has been held in a German speaking country, and it presented unique challenges to the organizers. For example, neither the term nor the field of adapted physical activity was known in Germany before the symposium. Thus, at the outset, the organizers' task was to define the meaning of adapted physical activity as a concept and to identify areas and professionals associated with it. After lengthy and intense discussions we agreed on the following definition: Adapted physical activity refers to movement, physical activity, and sports in which special emphasis is placed on the interests and capabilities of individuals with limiting conditions, such as the disabled, health impaired or aged. Despite the fact that the use of an English term for a symposium in Germany would not be accepted by all German speaking professionals, it was decided to use this term because no translation appeared to be fully adequate. "Sports for the Disabled", "Modified Movement Activites", "Sport Therapy", or "Psychomotor Exercises" would have represented only single aspects of adapted physical activity and were thus incomplete.