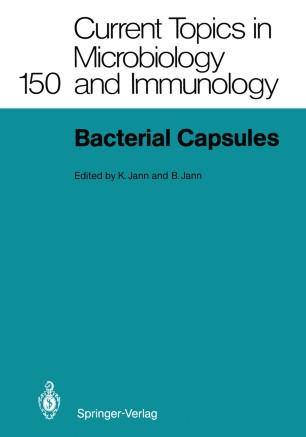 Many bacteria, such as certain Neisseria and Haemophilus or Escherichia coli, are able to withstand the bactericidal activity of complement and phagocytes. This bacterial self protection is brought about by encapsulation. Bacterial capsules thus enable the pathogenic bacteria to survive in the host by counter­ action or evasion of the nonspecific host defense in the early pre immune phase of an infection. It is only in the late immune phase of the infection, when specific anticapsular antibodies are formed and enforce the host's defense system, that this protective action is overcome. Encapsulated bacteria are then killed and eliminated. Interestingly, some capsules can not or only inefficiently be handled by the immune system. The ensuing lack of antibody formation results in a prolonged susceptibility of the host to the pathogenic bacteria exhibiting such capsules. It was found that bacterial capsules consist of acidic poly­ saccharides. From this it followed that the role of the capsules in the interaction of encapsulated bacteria with the host may be due to the chemistry of the capsular polysaccharides. This led to intensive studies of capsular polysaccharides in many laboratories. Our increasing knowledge of the structural features of capsular polysaccharides prompted not only immuno­ chemical studies analyzing the interactions of these poly­ saccharide antigens and characterizing the epitopes, but also investigations into their biosynthesis. These studies were complemented and supported by genetic analyses. Today many interdisciplinary investigations of capsular polysaccharides are in progress.