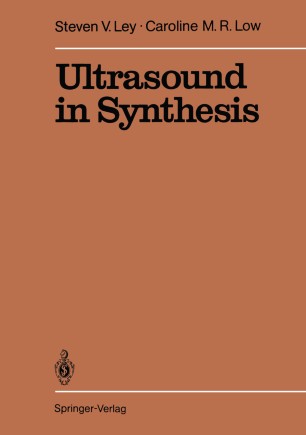 The effects of heat and light on chemical reactions have long been known and un­ derstood. Ultrasound has been known to promote chemical reactions for the past 60 years, but despite this, it did not attract the attention of synthetic chemists until recently. This arose historically from early studies which concentrated almost exclu­ sively on reactions in aqueous media and was also, in some measure, due to the availability of suitable technology. Since the early 1980s a plethora of literature has appeared of direct interest to synthetic chemists and the field has been developing rapidly. The aim of this book is to bring the background of this fascinating field to the atten­ tion of a wider audience. It explores the literature to date and attempts to indicate other areas in which ultrasound may be exploited. It also hopes to explode some of the myths surrounding this area which have hitherto been regarded by the synthetic community as a bit of a black art! Existing books and reviews have tended to concentrate on the physics of sonochem­ istry and to catalogue the instances in which ultrasound has proved useful in tack­ ling synthetic problems. Our aim has been to stress the relevance of this technique to synthetic chemists and we have included a section which deals with the practical aspects of carrying out these reactions.