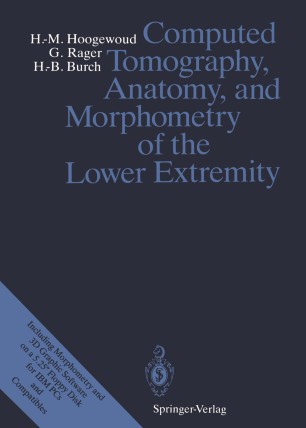 Computed Tomography, Anatomy, and Morphometry of the Lower Extremity

When computed tomography (CT) was developed and introduced by Hounsfield (1973), a new era of clinical diagnostic potential began. At the same time CT created new difficulties, in that the physicians who had to deal with the CT images were not acquainted with their interpre­ tation. Therefore, it became necessary to compare CT scans with ana­ tomical sections, which gave additional information by virtue of their higher resolution, the different colors and consistencies of the struc­ tures, and the possibility to trace these structures across several sections. Several atlases comparing CT scans and anatomical sections were pub­ lished soon after the introduction of the new technique. The resolving power of the new scanners has increased consider­ ably, necessitating a renewed comparison between CT scans and ana­ tomical sections. A threefold need for higher-quality anatomical sec­ tions has also become evident: First, tissue preservation should be excellent. Second, the sections should not be thicker than the scans ob­ tained by the CT procedure. Third, the series of sections should be complete in order to permit three-dimensional reconstructions. We have tried to meet these requirements, restricting ourselves to the analysis of the lower extremity. The leg had to be scanned serially, then cut in serial sections in such a way that the CT planes and the ana­ tomical sections corresponded optimally. As many sections had to be il­ lustrated as were necessary to demonstrate changes in the internal struc­ ture of the extremity wherever they occurred.