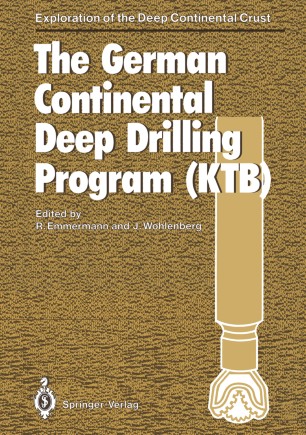 Site-selection Studies in the Oberpfalz and Schwarzwald

In October 1986 the German Minister for Research and Technology (Bundesminister fUr Forschung und Technologie), Dr. H. Riesenhuber, officially announced that the super-deep borehole of the Continental Deep Drilling Program of the Federal Republic of Germany (KTB) would be drilled in the Oberpfalz area of Northern Bavaria. The site selection was based on a recommendation from the Deutsche Forschungsgemeinschaft (DFG) made after an evaluation by the Project Management of the technical and financial risks involved. This decision was preceded by a conference held from September 19 to 21, 1986 in Seeheim/Odenwald at which the results of the site studies in the Oberpfalz and the Schwarzwald were presented and thoroughly debated. The models and scientific targets resulting from these investigations formed the basis for a vote by the DFG Senate Commission for Geoscientific Interdisciplinary Research which was taken immediately after the conference. After evaluation of all scientific and technical aspects, the members of the commission voted almost unanimously for the Oberpfalz site. It was, ho",'ever, strongly emphasized that both locations had a wealth of attractive research objectives and that despite clear-cut differences in some major aspects scientifically the two could be regarded as more or less equivalent. Both'locations would be excellent sites for research drilling and would certainly cor.