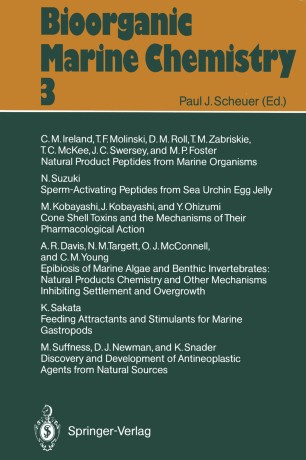 The first three chapters of Vol. 3 of Bio-organic Marine Chemistry deal with the chemistry and function of peptides. Chapter 1 by Ireland and coworkers serves as an introduction to marine-derived peptides. It is arranged phyletically and encompasses the entire range from dipeptides to a compound with 95 amino acid residues. Peptides involved in primary metabolism and hence belonging to the realm of macromolecular biochemistry are excluded. However, it might be mentioned in passing that the dividing line between large and small molecule chemistry is continually becoming less distinct. Not only are more compounds of intermediate size, from 1,000 to 10,000 dalton, being discovered, but instruments and techniques, particularly in mass spectrometry and nuclear magnetic resonance have been developed for their structural elucidation by what is considered small molecule methodology. Two groups of peptides are discussed in separate chapters. Biologists who have observed and described the mating behavior of diverse species of marine invertebrates have long surmised that a chemical mechanism might be operating in many cases of individual as well as mass fertilization. The chemical activators of sea urchin sperm prove to be a series of peptides, whose structures and activity are discussed by Suzuki.