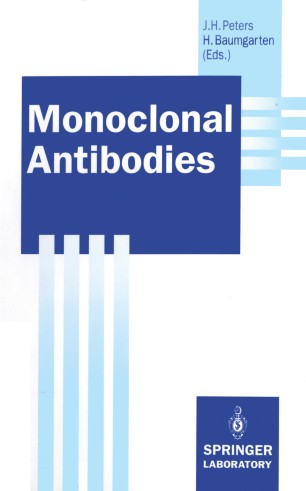 The present new version of this popular laboratory manual is at the same time the first one of this text in the English language - and this makes me even a little proud, as it reminds me of probably the first collection of monoclonal recipes in English, written by myself, which circulated for a couple of years in many laboratories. In the meantime many researchers have put enormous effort into improving methods for monoclonal antibody production. The proce­ dures have become more and more standardized and by this have more and more lost the character of magic secrets. Hinrich Peters and Horst Baumgarten, who had followed this good tradition already in the previous edition, written in German, suc­ ceeded in making laboratory tricks teachable. They had contributed their own experiences in cell culture and immunology, and were able to engage a number of experienced authors to contribute to the work. They were all willing to follow the general concept of this book, which contains a brief theoretical background for the methods described and presents the procedures in a highly organized structure. So the book has retained its shape as a "cook-book", which I especially like.