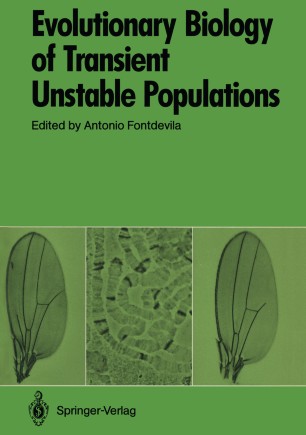 An overview of speciation theory reveals an increasingly held view that many events leading to the origin of new species occur in transient, unstable populations. A transient, unstable population should be under­ stood as a fast episodic phase in a population subjected to genetic and environmental factors that tend to disrupt its cohesive, balanced genome architecure, thus enhancing its probability to produce a new species. Striking the core of Darwinian thought, some authors claim that these· processes may be non-adaptive. Among the environmental factors one may cite biotic (e.g. resource availability) and abiotic (e.g. temperature) stress conditions that break up the population stability producing random, unpredictable changes in population size, population trait distribution, breeding structure, inter- and/or intrapopulational hybridization, etc. Genetic factors consist of those events that induce rapid changes in genetic expression and/or that determine reproductive isolation, such as substitutions, insertions, deletions, duplications, transpositions, gross chromosomal rearrangements, recombination and, in general, any mechanism that changes the regulatory pattern of the organism or the balance of its meiotic system. Both kinds of factors are often intertwined in a complex net and may influence each other.