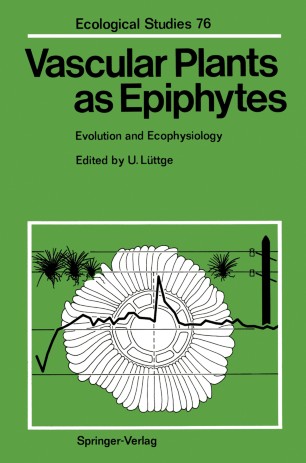 In his lectures my teacher Karl Mägdefrau used to say that one only becomes a real plant scientist when one enters a tropical rainforest. For me this initiation occurred in 1969 in northern Queensland, Australia, and was associated with the greatest excitement. On another level it received confirmation when I set out in 1983 together with some friends and colleagues for the first detailed ecophysiological studies of epiphytes in the wet tropics in situ in the island of Trinidad and later for similar work in Venezuela. This then promoted the idea of organizing a special symposium on "The evolution and ecophysiology of vascular plants as epiphytes" during the XIV International Botanical Congress in luly 1987 in Berlin, and to ask some of the speakers to produce chapters for a small monograph on the interesting ecologically defined group of plants "epiphytes" as presented in this volume of "Ecological Studies". The enthusiasm of the participants of the symposium giving reports and adding to the discussion was most stimulating, and it appears that epiphytes might gain well-deserved, wider consideration in the future. The cooperation with the authors of this book was very pleasant and I appreciated the new contacts established with adepts of the "epiphyte community". The chapters were organized and arranged covering first more gen­ eral aspects with setting the scene in Chapter 1, the evolution of epi­ phytism in Chapter 2 and the role of CO -concentrating mechanisms in 2 Chapter 3.