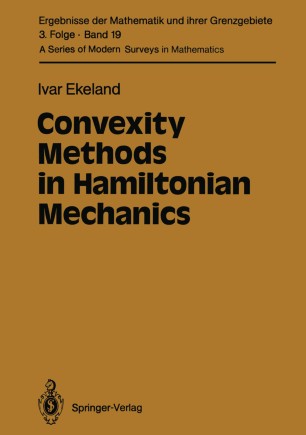 In the case of completely integrable systems, periodic solutions are found by inspection. For nonintegrable systems, such as the three-body problem in celestial mechanics, they are found by perturbation theory: there is a small parameter € in the problem, the mass of the perturbing body for instance, and for € = 0 the system becomes completely integrable. One then tries to show that its periodic solutions will subsist for € -# 0 small enough. Poincare also introduced global methods, relying on the topological properties of the flow, and the fact that it preserves the 2-form L~=l dPi 1\ dqi' The most celebrated result he obtained in this direction is his last geometric theorem, which states that an area-preserving map of the annulus which rotates the inner circle and the outer circle in opposite directions must have two fixed points. And now another ancient theme appear: the least action principle. It states that the periodic solutions of a Hamiltonian system are extremals of a suitable integral over closed curves. In other words, the problem is variational. This fact was known to Fermat, and Maupertuis put it in the Hamiltonian formalism. In spite of its great aesthetic appeal, the least action principle has had little impact in Hamiltonian mechanics. There is, of course, one exception, Emmy Noether's theorem, which relates integrals ofthe motion to symmetries of the equations. But until recently, no periodic solution had ever been found by variational methods.