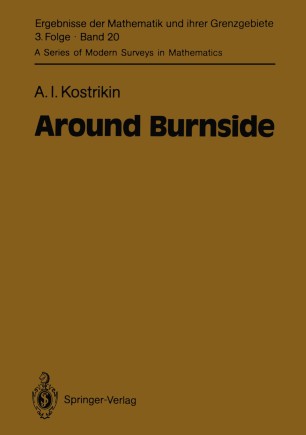 Perhaps it is not inappropriate for me to begin with the comment that this book has been an interesting challenge to the translator. It is most unusual, in a text of this type, in that the style is racy, with many literary allusions and witticisms: not the easiest to translate, but a source of inspiration to continue through material that could daunt by its combinatorial complexity. Moreover, there have been many changes to the text during the translating period, reflecting the ferment that the subject of the restricted Burnside problem is passing through at present. I concur with Professor Kostrikin's "Note in Proof', where he describes the book as fortunate. I would put it slightly differently: its appearance has surely been partly instrumental in inspiring much endeavour, including such things as the paper of A. I. Adian and A. A. Razborov producing the first published recursive upper bound for the order of the universal finite group B(d,p) of prime exponent (the English version contains a different treatment of this result, due to E. I. Zel'manov); M. R. Vaughan-Lee's new approach to the subject; and finally, the crowning achievement of Zel'manov in establishing RBP for all prime-power exponents, thereby (via the classification theorem for finite simple groups and Hall-Higman) settling it for all exponents. The book is encyclopaedic in its coverage of facts and problems on RBP, and will continue to have an important influence in the area.