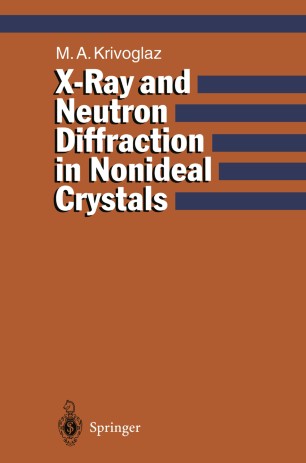 Mikhail Alexandrovich Krivoglaz died unexpectedly when he was preparing the English edition of his two-volume monograph on diffraction and diffuse scatter­ ing of X-rays and neutrons in imperfect crystals. His death was a heavy blow to all who knew him, who had worked with him and to the world science community as a whole. The application of the diffraction techniques for the study of imperfections of crystal structures was the major field of Krivoglaz' work throughout his career in science. He started working in the field in the mid-fifties and since then made fundamental contributions to the theory of real crystals. His results have largely determined the current level of knowledge in this field for more than thirty years. Until the very last days of his life, Krivoglaz continued active studies in the physics of diffraction effects in real crystals. His interest in the theory aided in the explanation of the rapidly advancing experimental studies. The milestones marking important stages of his work were the first mono­ graph on the theory of X-ray and neutron scattering in real crystals which was published in Russian in 1967 (a revised English edition in 1969), and the two­ volume monograph published in Russian in 1983-84 (this edition is the revised translation of the latter).