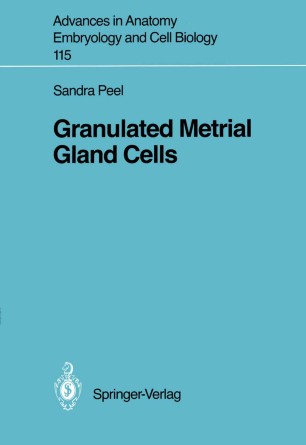 1. 1 Historical Aspects and Terminology Granulated metrial gland (GMG) cells are readily identified by their cytoplasmic granules and were observed a number of years before the term "metrial gland" was introduced. A series of papers by Duval in 1891 provided a comprehensive description and a critical review of earlier studies of the placenta of rodents, but it was not until 1902 that the first convincing illustrations of GMG cells appeared in the literature (Jenkinson 1902). Jenkinson described "maternal glycogen cells" in the pregnant mouse uterus and noted that they contained cytoplasmic granules which stained with a variety of dyes. From his detailed description of the appearance and distribution of these maternal glycogen cells it is clear that he had observed what are now called granulated metrial gland cells. In 1911 Ancel and Bouin used the phrase une glande myometriale endocrine to describe a structure appearing between the muscle layers of the uterus at the insertion site of the placenta in rabbits. They described one of the cell types present in the glande myometriale as having the characteristics of glandular cells and noted their content of safraninophilic cytoplasmic granules. A glande myometriale endo­ crine was also described in the pregnant rat uterus by Weill (1919). He reported that the cellules granuleuses contained acidophilic inclusions and despite the absence of any illustrations in his paper it is apparent that he also had observed GMG cells.