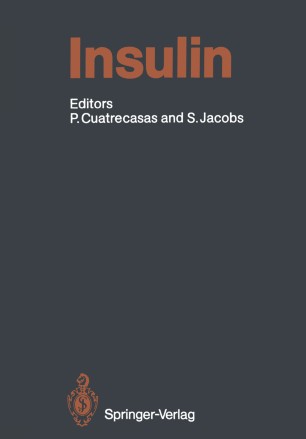 It is fourteen years since insulin was last reviewed in The Handbook of Ex­ perimental Pharmacology, in volume 32. The present endeavor is more modest in scope. Volume 32 appeared in two separate parts, each having its own subeditors, and together the two parts covered nearly all areas of insulin pharmacology. Such comprehensiveness seemed impractical in a new volume. The amount of in­ formation related to insulin that is now available simply would not fit in a reasonable amount of space. Furthermore, for better or worse, scientists have be­ come so specialized that a volume providing such broad coverage seemed likely in its totality to be of interest or value to very few individuals. We therefore decided to limit the present volume to the following areas: insulin chemistry and structure, insulin biosynthesis and secretion, insulin receptor, and insulin action at the cellular level. We felt these areas formed a coherent unit. We also felt, perhaps as much because of our own interests and perspectives as any objective reality, that these were the areas in which recent progress has been most dramatic, and yet, paradoxically and tantalizingly, these were the areas in which most has yet to be learned. Even with this limited scope, there are some major gaps in coverage. Regrettably, two important areas, the beta cell ATP-sensitive potassium channel and the glucose transporter, were among these. Nevertheless, the authors who con­ tributed have done an excellent job, and we would like to thank them for their diligence.