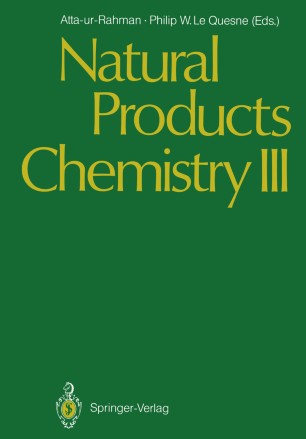 Natural product chemistry has undergone an explosive growth during the latter half of the current century. This has been brought about by a number of factors. One of these has been the growing number of sub­ stances from natural sources which display interesting pharmacological activities. These include antibiotics, anti-tumor agents, immunostimu­ lants, drugs affecting the cardiovascular and central nervous systems, analgesics etc. Another factor has been the improvements made in the technology of isolation processes which includes the development of such techniques as high pressure liquid chromatography which has al­ lowed the rapid isolation of substances which were previously diffi­ cult to obtain by classical procedures. The most important factor has been the development of new spectrosopic techniques which have opened up whole new vistas in this exciting field. Prominent in these advan­ ces has been the advent of powerful superconducting magnets with very stable magnetic fields, and pulse NMR in which the duration, direction and phases of pulses can be accurately controlled by means of mini­ computers. These have heralded the advent of two-dimensional NMR spec­ troscopy which has now come to be routinely employed in unravelling complex structures. No less important, though somewhat less dramatic, have been the advances made in the field of mass spectroscopy where new ionization techniques such as positive and negative fast atom bom­ bardment, field desorption, chemical ionization etc. have allowed the mass spectra of larger non-volatile substances to be recorded. The field of organic synthesis has seen equally rapid advances.