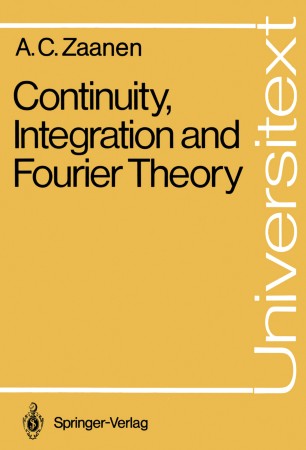 This book is a textbook for graduate or advanced undergraduate students in mathematics and (or) mathematical physics. It is not primarily aimed, therefore, at specialists (or those who wish to become specialists) in integra­ tion theory, Fourier theory and harmonic analysis, although even for these there might be some points of interest in the book (such as for example the simple remarks in Section 15). At many universities the students do not yet get acquainted with Lebesgue integration in their first and second year (or sometimes only with the first principles of integration on the real line ). The Lebesgue integral, however, is indispensable for obtaining a familiarity with Fourier series and Fourier transforms on a higher level; more so than by us­ ing only the Riemann integral. Therefore, we have included a discussion of integration theory - brief but with complete proofs - for Lebesgue measure in Euclidean space as well as for abstract measures. We give some emphasis to subjects of which an understanding is necessary for the Fourier theory in the later chapters. In view of the emphasis in modern mathematics curric­ ula on abstract subjects (algebraic geometry, algebraic topology, algebraic number theory) on the one hand and computer science on the other, it may be useful to have a textbook available (not too elementary and not too spe­ cialized) on the subjects - classical but still important to-day - which are mentioned in the title of this book.