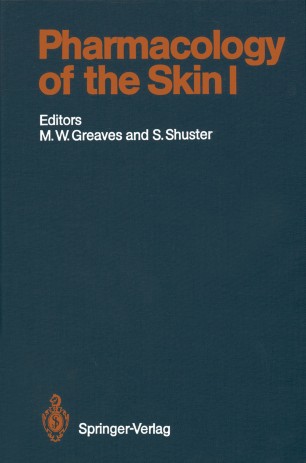 Pharmacology of the Skin I

Pharmacology of Skin Systems Autocoids in Normal and Inflamed Skin

The recent interest in the pharmacology of the skin and the treatment of its diseases has come about for two reasons. The first is a realisation that many aspects of pharmacology can be studied as easily in human skin, where they may be more relevant to human physiology and diseases, as in animal models. Examples of this are the action of various vasoactive agents and the isolation of mediators of inflammation after UV irradiation and antigen-induced dermatitis. The second reason is the fortuitous realisation that a pharmacological approach to the treatment of skin disease need not always await the full elucidation of etiology and mechanism. For example, whilst the argument continued unresolved as to whether the pilo-sebaceous infection which constitutes acne was due to a blocked duct or to a simple increase in sebum production, 13-cis-retinoic acid was found quite by chance totally to ablate the disease; again, whilst cyclosporin, fresh from its triumphs in organ transplantation, has been found able to suppress the rash of psoriasis, it has resuscitated the debate on etiology. We are therefore entering a new era in which the pharmacology and clinical pharmacology of skin are being studied as a fascinating new way of exploring questions of human physiology and pharmacology as well as an important step in the development and study of new drugs, use of which will improve disease control and at the same time help to define pathological mechanisms.