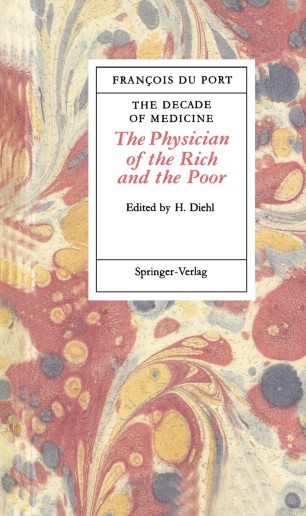 in which all the Signs, Causes and Remedies of Disease Are Clearly Expounded

he purpose of this book is to give the reader T an impression of medical science in seven­ teenth-century France. The French physician FRAN(fOIS DU PORT was the actual author of the book ) La Decade de Medecine ou Le Medecin des Riches et des Pauvres(. Working for thirty years as a country doctor enabled him to report the symptoms and causes of different diseases, and during the reign of LOUIS XIII (1601-1643), he recorded his experiences in Latin verse. In I 69 1, the adviser and official physician to LOUIS XIV Du FOUR acquired the rights to Du PORT'S book: he transcribed the doctor's experiences into French verse and in 1694, in Paris, )La Decade de Medecine ou Le Medecin des Riches et des Pauvres ( was published in Latin and French verse. In 1980, whilst staying in Avignon, France, M. DIEHL chanced upon a copy of this edition, which was then exactly 286 years old. Her father, H. DIEHL, was fascinated by the possibility of gaining an insight into the diagnostic and thera­ peutic practices of the 17th century in this unusual way. As soon as he returned home, he started translating the book into German: It is divided into 10 sections with 253 chapters and approxi­ mately 500 pages. The book was translated into English by Dr. DAVID LE VAY, Wadhurst, Eng­ land, in 1988.