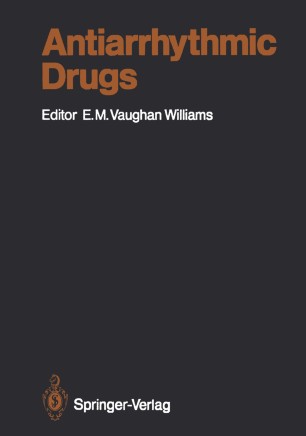 The development of a new antiarrhythmic drug involves many people with disparate skills. The organic chemist who makes it is guided not only by the structure-action relations of previous compounds, but by anticipation of a requirement for a particular type of action. In fact several of the best-known antiarrhythmics, including lidocaine, mexiletine, amiodarone and verapamil, were originally synthesized for other purposes. Physicians have to determine whether the new drug works, and pharma­ cologists how it works. For some years I have believed that there was room for a work which could be understood by all these groups and which could enlighten each about the point of view of the others. Thus when I was invited by Springer-Verlag to prepare a volume in their series Handbook of Experimental Pharmacology, I already had a firm conception of what its form should be. In any multi-author work there are two objectives which cannot always readily be reconciled. The first is to select topics which would relate to each other in a coherent manner. to give a logical and orderly shape to the volume as a whole. The second is to offer authors the greatest possible freedom to express themselves as they wish. When the general design was complete, prospective contributors were invited to write specific chapters, being provided with a complete list of their coauthors and chosen topics, so that they could avoid overlap.