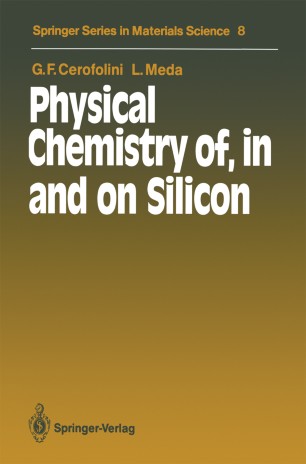 Physical Chemistry of, in and on Silicon

The aim of this book is twofold: it is intended for use as a textbook for a ~ourse on electronic materials (indeed, it stems from a series of lectures on this topic delivered at Milan Polytechnic and at the universities of Modena and Parma), and as an up-to-date review for scientists working in the field ::>f silicon processing. Although a number of works on silicon are already available, the vast amount of existing and new data on silicon properties are nowhere adequately summarized in a single comprehensive report. The present volume is intended to fill this gap. Most of the examples dealt with are taken from the authors' every­ day experience, this choice being dictated merely by their greater knowl­ edge of these areas. Certain aspects of the physics of silicon have not been included; this is either because they have been treated in standard textbooks (e.g. the inhomogeneously doped semiconductor and the chem­ istry of isotropic or preferential aqueous etching of silicon), or because they are still in a rapidly evolving phase (e.g. silicon band-gap engineering, generation-recombination phenomena, cryogenic properties and the chem­ istry of plasma etching). In line with the standard practice in microelectronics, CGS units will be used for mechanical and thermal quantities, and SI units for electrical quan­ tities. All atomic energies will be given in electronvolts and the angstrom will be the unit of length used for atomic phenomena.