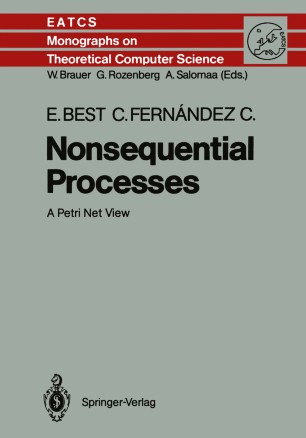 The theory of Petri nets is a part of computer science whose importance is increasingly acknowledged. Many papers and anthologies, whose subject matter is net theory and its applications, have appeared to date. There exist at least seven introductory textbooks on the theory. The present monograph augments this literature by offering a mathematical treatment of one of the central aspects of net theory: the modelling of concur­ rency by partially ordered sets. Occurrence nets - which are special nets as well as special partial orders - are proposed by net theory for this purpose. We study both the general properties of occurrence nets and their use in describing the concurrent behaviour of systems. Occurrence nets may be contrasted with a more language-oriented approach to the modelling of concurrency known as arbitrary interleaving. We will dis­ cuss some connections between these' two approaches. Other approaches based on partially ordered sets - such as the theory of traces, the theory of event structures and the theory of semi words - are not considered in this book, in spite of the strong links between them and net theory.