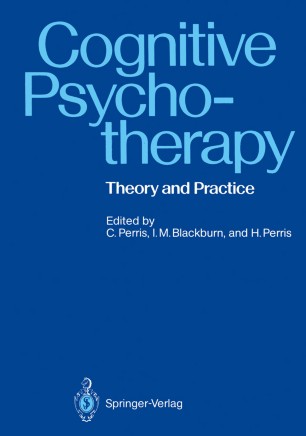 Developed in the early 1960s by Aaron Beck and Albert Ellis in the USA, mostly for the short-term treatment of patients suffering from emotional disorders, cognitive psychotherapy has rapidly expanded both in its scope and geographically. In fact, when attending recent European conferences relating to psychotherapy, for example, those organized by the European Association of Behaviour Therapy and the European Branch of the Society for Psychotherapy Research, the 13th International Congress of Psychotherapy, and the two international conferences on cognitive psychotherapy which took place in Lisbon in 1980 and in Umea in 1986, one could not but become aware of the active interest in cognitive theory and practice on the European continent. It is stimulating to find that cognitive approaches to the understanding of human emotion and behaviour, which find their origin in the writings of the ancients as well as in eighteenth-century philosophers, principally Kant, are no longer a strictly transatlantic movement. As the chapters of this handbook demonstrate, researchers and clinicians from many different European countries have been devel­ oping the theoretical aspects of the cognitive theory of the emotional disorders and applying it in their practice. These chapters can of course represent but a sample of all the work being carried out, but we hope that they will be both informative and stimulating to researchers and therapists on both sides of the Atlantic.