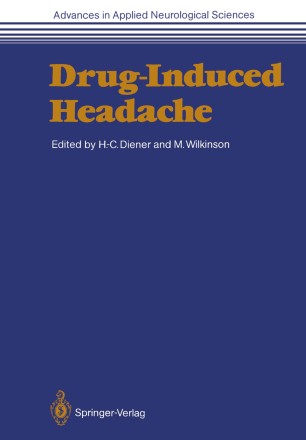 M. WILKINSON Patients with frequent or daily headaches pose a very difficult problem for the physician who has to treat them, particularly as many patients think that there should be a medicine or medicines which give them instant relief. In the search for the compound which would meet this very natural desire, many drugs have been manufactured and the temptation for the physician is either to increase the dose of a drug which seems to be, at any rate, partially effective, or to add one or more drugs to those which the patient is already taking. Although there have been some references to the dangers of overdosage of drugs for migraine in the past, it was not until relatively recently that it was recognized that drugs given for the relief of headache, if taken injudiciously, may themselves cause headache. The first drugs to be implicated in this way were ergotamine and phenazone. In the case of ergotamine tartrate, the dangers of ergotism were well known as this was a disorder which had been known and written about for many years. In the treatment of headache, fully blown ergotism is rare and in recent years has usually been due to self-medication in doses much greater than those prescribed although there are a few recorded cases where toxic amounts have been given.