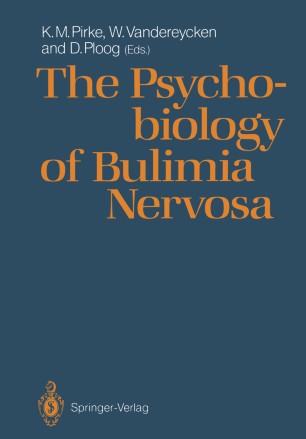 The Psychobiology of Bulimia Nervosa

Research and Treatment in the Psychobiology of Bulimia Nervosa 1 2 K. M. Pirke and W. Vandereycken When we were preparing this book, the main purpose was to gather the latest in­ sights from both basic and clinical research in bulimic disorders. The burgeoning scientific interest in eating disorders forced us to restrict the focus in such a way that attention was only paid to psychobiological aspects of (disturbed) nutrition and be­ havior. This implied that other important aspects, like sociocultural and familial fac­ tors, had to be excluded. But it turned out that even with such a restricted scope the subject was not an easy one. A review of the contributions to this volume clearly shows that our present understanding of bulimia nervosa is still very small. Reviewing the hypothalamic and especially neuroendocrine regulation of nutrient balance, Bray has emphasized the importance of the autonomic nervous system in regulating food intake and energy expenditure. The role of insulin, adrenal steroids, gonadal steroids, and growth hormone in modulating nutrient intake and storage were discussed. The studies by Jimerson et aI. , Schweiger et aI. , and Fichter et al. show that all these factors are altered in bulimic patients, indicating that the whole system of regulating food intake and storage is severely disturbed in bulimia nervosa. Evidence has been presented that neurotransmitter alterations may occur in bulimia: Jimerson et al.