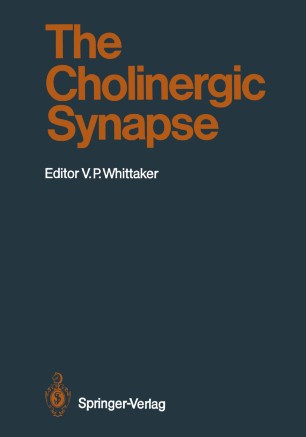 One of the most impressive works of scholarship in the field of experimental pharmacology has been the Heffter-Heubner Handbuch der experimentellen Pharmakologie, internationalized some years ago under the title Handbook 0/ Experimental Pharmacology and kept up to date by a series of numbered Ergiin­ zungswerke or supplementary volumes which have now replaced in importance the original Handbuch. These volumes constitute a valuable and continuously up­ dated multi author review series of topics important in modern pharmacology and allied sciences. The Editorial Board of the Handbook invited me 2 years ago to undertake, as subeditor, the preparation of a new volume entitled The Cholinergic Synapse. A previous volume in this series, vol. 15, Cholinesterases and Anticholinesterase Agents, edited by GEORGE KOELLE, was published in 1963 and was far wider in scope than its title suggested: it was, in fact an authoritative summing up of the whole subject of cholinergic function and still has some value today as an account of the state of the art as it was at that time. Since then another excellent review, of a specific cholinergic synapse, has appeared in this series: this was vol. 42, Neuromuscular Junction, edited by ELEANOR ZAIMIS and published in 1976. A third volume, vol. 53, Pharmacology o/Ganglionic Transmission, which appeared in 1980 and was edited by D. A. KHARKEVICH, includes important aspects of autonomic cholinergic function.